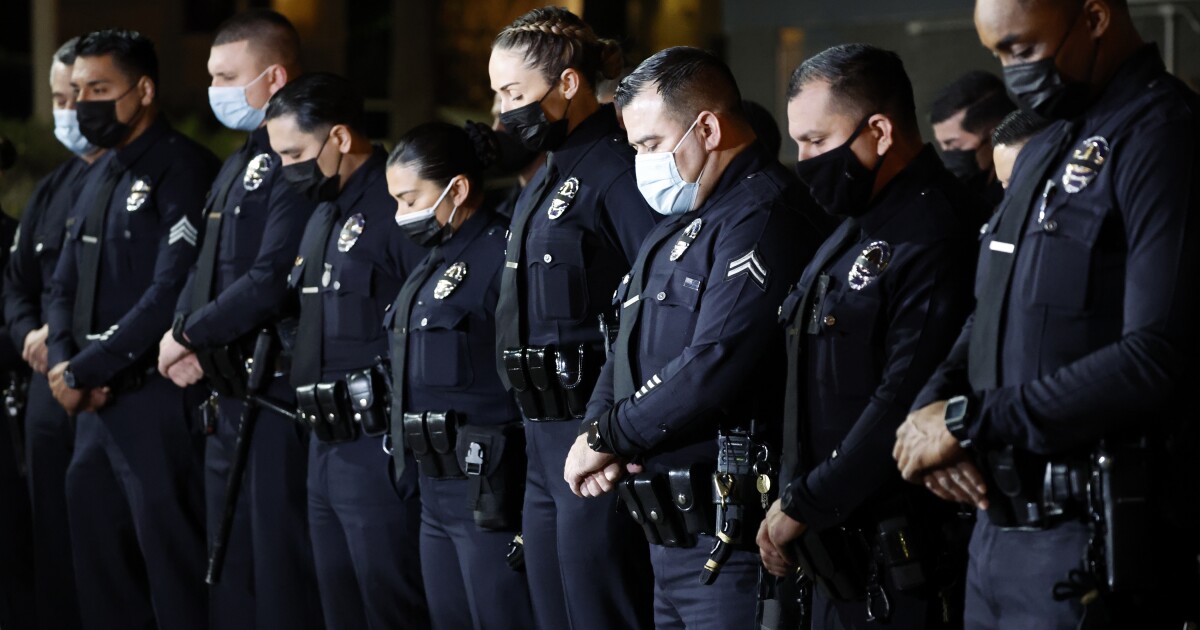 Federal prosecutors charged four people Thursday in the fatal shooting of an off-duty Los Angeles police officer, alleging they are members and associates of a street gang that killed the officer while trying to rob him.

Jesse Contreras, 34; Ernesto Cisneros, 22; Luis Alfredo de la Rosa Rios, 27, and Haylee Marie Grisham, 18, are charged with the murder of officer Fernando Arroyos as a violent crime for the benefit of the Florencia 13 gang racket. Prosecutors allege the three men are gang members and that Grisham, Rios’ girlfriend, is an associate. The complaint alleges that the four defendants committed the robbery and murder “to increase and maintain their position” within the multi-generational street gang.

If convicted, the defendants would face the death penalty because they are charged with murder in the commission of a robbery, the U.S. Attorney’s Office said in a statement. They are expected to be transferred to a federal facility on Friday morning and appear in court later in the day.

The charges come three days after Arroyos, 27, and his girlfriend were attacked while parked in an alley in the unincorporated neighborhood of Florence-Firestone near Watts. The couple were looking for a house and had stopped to take photos of a place for sale when two of the men pulled up in a van and approached them, authorities said.

According to a sworn affidavit from an FBI agent, Rios told Los Angeles County Sheriff’s investigators in an interview that the four of them were in the truck the night of the robbery: he was driving, Grisham was in the seat passenger, and Cisneros and Contreras were behind them, when they spotted Arroyos and his girlfriend.

Surveillance video of the attack shows Rios and Cisneros pointing guns at the couple, according to the affidavit, which also says they removed a chain from the officer’s neck and a black cane from his girlfriend.

After an exchange of gunfire between the two suspects and the officer, Arroyos ran to the alley and collapsed, according to the affidavit of FBI Special Agent Seamus Kane. It does not say who fired first.

Arroyos’ girlfriend returned to the car and attempted to pull him inside, calling 911, police said.

The assailants fled. When Los Angeles County Sheriff’s Deputies arrived, they drove the injured officer in their patrol car to a hospital, where he was later pronounced dead.

A second video suggests that Cisneros was injured by Arroyos’ shots. Surveillance video from Junction Street shows Contreras lifting Cisneros, who appears to be injured, out of the black van and stripping him of clothes. Contreras appears to be hiding the clothes on the side of a house, according to the affidavit.

Rios told LA County Sheriff’s investigators in an interview that the group were driving for the purpose of “making money” – a term for robberies – when they came across the couple, according to the affidavit.

He told investigators his nickname is “Lil J” and that he is a member of F13, as Florencia 13 is known, and he showed deputies a Florencia 13 tattoo on his chest and a tattoo on his arm featuring his clique. , “Tiny Locos,” according to the affidavit. Similarly, Cisneros stated that his nickname is “Gonzo” and displayed several tattoos for the gang, as did Contreras, who stated that he had no not been active since he had children.

Rios admitted to firing a handgun during the robbery and believed Cisneros also discharged a weapon. Waiver of his rights, he told investigators he searched the girlfriend, took her cane, and that Cisneros pulled Arroyos’ wallet from his pants pocket.

Rios admitted to throwing a white hoodie after it became bloody when a bullet grazed his left rib cage, according to the affidavit. He also said that Cisneros handed him Arroyos’ wallet and he later threw it away after taking $100.

Contreras told investigators that the chains Arroyos wore around his neck led them to rob the couple, but he did not admit to shooting, according to the affidavit.

Grisham reportedly told investigators that Rios said, “He’s got a nice chain, let’s go.” She said she saw Cisneros point a gun at the man and say, “Give him his chains,” and saw Rios, who was armed, search the woman. She then heard several gunshots, according to the affidavit, and when Cisneros got back into the truck, he injured himself and said “he had a broken leg.”

Investigators, according to the affidavit, placed a person working with law enforcement in cells with the suspects to extract information about their crimes and their ties to the gangs.

In the hours following the murder, sheriff’s homicide detectives, with the help of their LAPD counterparts, interviewed several men and women they believed had information about the murder, sources said. On Wednesday morning, Sheriff Alex Villanueva announced that four men had been arrested in connection with the murder, but he declined to name them or provide further details.

Arroyos, a talented student who attended Crenshaw High School and graduated from UC Berkeley, had been saving up for a house during his three years as an LAPD officer, his mother said after his murder.

He died in a neighborhood that has seen a sharp increase in violent crime over the past two years, part of a broader increase in murders and shootings across the city and county. Florence-Firestone was among the hardest hit neighborhoods. According to county coroner data, there were 24 homicides in the neighborhood in the first 11 months of 2021, compared to nine during the same period in 2020 and 12 in 2019. Last year’s murders were the highest in a decade.

Sheriff’s officials linked much of the bloodshed in the area to the Florencia 13 gang.

In 2019, federal prosecutors indicted 36 alleged members and associates of the gang, charging them with engaging in a criminal enterprise, drug trafficking, illegal gambling, attempted murder and assault.

Typically, police would take a case like this to prosecutors in the district attorney’s office, who would file charges in the county’s Superior Court. But Villanueva, an outspoken critic of Dist. Atty. George Gascón’s decision to no longer pursue sentencing enhancements in gang cases has ordered detectives to take the case to the U.S. Attorney’s Office, multiple sources said. These improvements in a murder case can mean the difference between a life sentence with the prospect of release and never getting out of behind bars again.

Murder in California is usually punishable by 25 years to life in prison. However, in special circumstances – such as membership in a gang or murder while committing another crime – a defendant can be sentenced to life without parole.

Arroyos had been with the LAPD for three years and was assigned to the Olympic Division.

“An angel in our town, Officer Fernando Arroyos, was shot dead while defending himself and his girlfriend while off duty, looking for a home for their first home,” he said. “Fernando grew up in Los Angeles, graduated from Crenshaw High School. I remember him from his graduation, he dreamed of becoming a police officer, went to a big college, UC Berkeley. And now his family. His mother, also an immigrant in our country, no longer has her only son.

“My heart is broken. The heart of our city is broken. And certainly the hearts of our LAPD family are all in mourning,” Garcetti said earlier this week.

LAPD Lt. Rex Ingram, who oversaw Arroyos and spoke to him often at the Olympic Division, said Arroyos had two dreams in life: to be the first in his family to go to college and to be an LAPD officer. . He more than succeeded in that, Ingram said.

“When I first read one of his reports, I knew his writing skills were far superior to those of his peers and, frankly, far above the abilities of his superiors,” Ingram said. . “So I asked him where he went to school, and he, being humble, said ‘LAUSD.’ And I say, ‘Which college?’ and he says, ‘Cal Berkeley.’

Arroyos was a devout Christian who grew up in a family with his mother, grandmother, and stepfather, attended 42nd Street Elementary School and Audubon Middle School before graduating from Crenshaw High and going to Berkeley, where he earned a degree in legal studies, Ingram said.

“He could have gone to law school or the FBI like his peers with that education, but he wanted to serve his community and give back,” Ingram said. “He loved his community…. He was very close to his family. »

“They were looking to get a house in the area,” Ingram said. “He was the most humble and happiest guy I know at work. It couldn’t happen to a nicer person.